Websites about sailing oceans in style 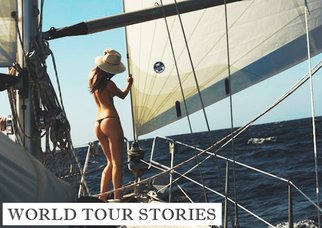 We've read a shipload of sites and blogs about sailing around the world and one we really like is World Tour Stories written by Taru & Alex.

"To sail the world. In our own tempo. Simple, minimalistic and close to the nature. With the comfort of the boat - our home, which would take us from one inspiring place to another.

We wanted to bring ourselves on a tour across the globe where the possibilities of a peaceful, harmonic, inspiring and fulfilling life would grow for each stop along the journey. So that's what we did. We sold most of our belongings, packed the boat and went sailing."

The first year was spent on accustom to living aboard  together and get rid of material things. And the following two years has been spent sailing from Spain to Morocco, across the Atlantic ocean, sold the old boat and got a new one, explored a new world in the Caribbean. They have slowly but surely built up their little (blog) business, finalized some major work on the new-old boat.

"Dreams are what keeps humans alive and what makes us go through hard moments like the ones we've gone through since we got this boat. Just gotta keep on fighting for a while longer" 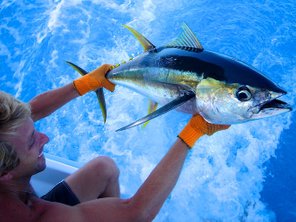 The sailing blog that kept me going the first couple of years building my boat and preparing for my one way never-ending trip around the world was Bumfuzzle written by Pat & Ali.

These guys just bought a boat & left without fussing or thinking at all. Ten years later, they are still cruising oceans & doubled the bum's on their deck.

We made the decision one night over a few too many beers. We were busy spending another Saturday night at our favorite pizza joint, Lou Malnatti's on Wells in Chicago, when the inebriated conversation turned to, “What are we going to do with our life?”

I had started following a few backpacker blog sites and then stumbled on some guy's boating in the islands website. Life on a boat? In the islands? Sounds perfect. The next morning, instead of waking up and coming to our senses, we were both on the internet researching.

Anyway, we bought a thirty-five foot catamaran after boat shopping for four hours or so, sailed across the Gulf Stream with about eight hours of sailing under our belts, and just kept clocking up the miles from there until we'd sailed that tradewinds route all the way around the world, learning something new every step of the way.

And sites about Piracy @ Sea 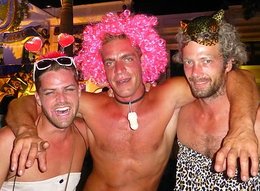 Phil has spent time living in and travelling around Mexico, Brazil, and most recently Belgium. Having spent the summer of 2010 renovating the boat under the working title "monster" here, he sailed her to the UK, Brittany, down across Biscay, around Portugal, and through the Strait Gibraltar to Mediterranean Spain.

He sets a great example assisted by a merry bunch of like minded neo pirates & sexy maidens.  Check out the latest party & sailing pics at svlibertalia.

The Carnival was hard work, and we were all thoroughly hungover. However, there was plenty of cultural anthropology to be done. We befriended the local boat taxistas, who took us for rides around town. A seemingly endless round of barbecues ensued in the company of local couchsurfers Viny and Alice, we did beef and fish, round and round, while I was trying to find a mechanic who would touch my diesel injector pump.

Live out where the real winds blow — sleep late, have fun, get wild, drink whisky, and drive fast on empty streets with nothing in mind except falling in love and not getting arrested... (Hunter S. Thompson)

Pat & Ali wrote the first blog I ever read about cruising oceans and are still great @ it.

Taru & Alex are living our dreams, touring across the globe , sailing  from one inspiring place to another.

Captian Phil & his merry bunch of Pirates roaming and feasting the seas.

Captain Liz Clark,  the coolest surfchick ever, sailing her Swell single handed for the last decade.

Cruising Blogs and Narratives from sailing yachts around the world.

Ley & Neil's site contains a lot of information that is of value to other cruisers.

The global site for cruising sailors.

Free, essential information for sailors planning an offshore voyage anywhere in the world.