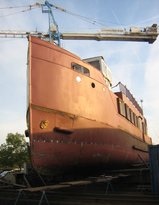 The first ship I build was a wooden crate used to transport engine parts to the project my parents worked for in Libya.

My vessel was a bit boxy and the sails where made out of bedsheets but it was sailing on sanddunes long before Jack Sparrow tried that with his Black Pearl.

The second ship was a submarine which was build out of a wooden frame about four meters long and 1 meter in diameter. The hull was made out of sterdy tar mats used for the irrigation canals and we had to heat a lot of tar in metal canisters to glue it together. My friend Taco Massar had his toes glued in the most horrific way possible when I poured molten tar over his bear feet by accident...

The thing never did see any water as it was to heavy to lift into the back of the pickup truck and it suffered a spectacular ending a couple of years later when we had a massive bonfire at my birthday party nearly burning the whole HVA camp in the process.

In 1999 I bought a wrecked ship without name and registration for 12,500 guilder (about 6000 euro). The ship didn't have a name, is 30 meters in length, 5.5 meters wide and had 2 decks. It came with a massive 50 KVA generator which was previously used for a weed plantation aboard.

The owner told me he took the ship from the previous owner to settle a depth. It had served as a coffee shop and dancing in Amsterdam and was originally build in the beginning of 1900 as a passsenger ship cruising Dutch waters.

My intention (young & foolish) was to rebuild the ship into an ocean going vessel to cruise the world and make my living by renting the ship to holiday guests or provide diving excursions in the Bahama's.

It took me many years, painful cuts and bruises, even blood and tears and loads off money before I had taken the ship apart and replaced 90% of the old ship with new steel plates. It took me another couple of years to make it into our home it is today.

The idea to go blue water cruising with the Orion-3, pops-up now and then again but I know it's fantasy and won't contribute to a great world touring trip anyway as it would cause a lot of problems besides the enormous costs for fuel or for rebuilding it into a sailing vessel.

If I learned one thing from all the cruising stories: how bigger & more expensive the boat, how more worries while leaving it unattended while roaming the country-side and cruising the Orion-3 single handed won't be easy either.

Having sailed ones a week in the English channel during my youth at the Old Malthouse boarding school gave me a good basis but it was too long ago to give me the convidence needed for stepping aboard a boat and setting sail on ocean travel adventures so we bought the Swallow to polish up my faded sailing skills.

The Swallow is a six meter Neptun-20 SV with a retractable daggerboard making her perfect for shallow waters or having her fall dry on mudbanks.

The advertisement folder states there is room for four to spent the night but that's very optimistic. There is barely enough room for three grown-ups or two with two kids. We had some amazing preparation trips with it and pushed it beyond the limits every time but it never failed us.

For the last prep trip we lost the mast on purpose to make room for a kite launch platform as we took my massive 13 meter Dyno kite to see if we could use it as a main propulsion system...

I didnt't think I would be saying this again after all the blood on the deck and so much swearing, but we will be giving it a second attempt this year.

We won't of course be taking the Swallow on our actual World Cruising Tour. It's definitely possible but we ain't that self distructive and crazy as you might think.

powered by wind generator propellers on a rotating mast. The windmill transmits power to a propeller underwater, with the net result that the boat can make way even directly into the wind. 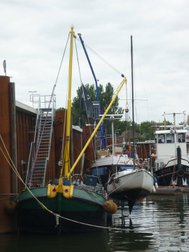 The idea to go blue water cruising with the Orion-3, pops-up now and then again but I know it's fantasy...