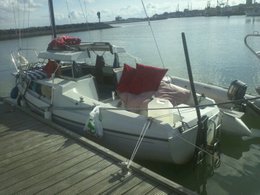 There are numerous books written about round about global sailing voyages and many contain excellent preparation tips & advice.

Last week I read two books written by Dutch guys who both prepared for the worst & hoped for the best and accomplished their dreams without loss of limbs & life. They scared the crap out of me though and made me wonder if we had to put more effort in the first part of our journey. Researchers added extra load to my feeling of unease, letting us know that global warming would probably tenfold the chance of sinking our plans in the years to come.

In this blog entry we journal our attempt to have fun conquering the oceans and staying alive. We would like you to help us by reading & adding comments to correct or advice us. I know, we ask a lot, so thanks in advance. We will try to reward your effort with great stories and pics of our tour around the world. 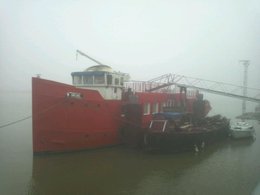 Besides us reading books & blogs about cruising oceans & planning places we would like to see we've also been taking sailing prep trips with different kinds of boats and ships. The last prep trips where with our small SV the Swallow.

The first ship I made was build from a wooden crate used to transport engine parts to the project my parents worked for in Libya. My vessel was a bit boxy and the sails where made out of bedsheets but it was sailing on sanddunes long before Jack Sparrow tried that with his Black Pearl.

The last 15 years I've been building the Orion-3. It's 31 meters long, 5,50 wide, 3 stories high (including the Bridge Deck) and it has cost me a lot of sweat, tears and even blood to create it into the monster it is today. It's almost finished but we probably won't take it on the World Tour around the world as it's just to big and frankly I would be very frightened leaving it for a couple of days bobbing around unguarded while we explore the inlands.

We are now planning to build a catamaran and fit it with solarpower and wind turbines to go on an electricly powered / sailing trip. 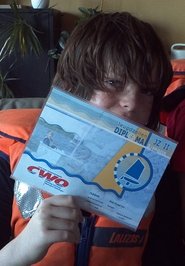 Slowly but at a steady pace we prepare for our life journey around the globe enjoying every step of the way. Stan & Dieye have a couple of years hard studying to do before we can leave for real but every year we take a sailing vacation exploring different seas and building experience and confidence.

What should we do without a ship. Sailor up as deckhands and hitchhike our way around the oceans?!

We need a vessel!

A ship without a crew is pretty useless... We need a crew with knowledge, determination and a sence of humor :)

Although sitting on the dock of the bay ain't that bad with beers & friends, we would like this ship & crew to see places besides sea and old faces. We need destinations on the map.

Before running our engine and driving our ship onto an ocean it's probably a good idea to start of with something smaller and make the prepping trips.

A lot of mistakes have been made by our fellow Cruisers. It's not smart to repeat them. We read their advice in Cruising Books and Websites.

Check out our cruising blog to see what we are up to :)