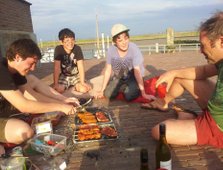 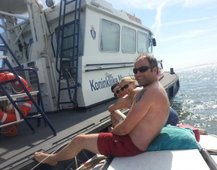 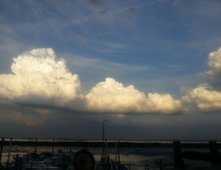 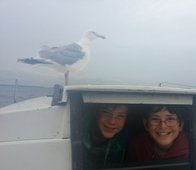 At the end of July, Stan, Dieye and myself undertook the last Dutch World Tour Preparation Trip (DWTPT). We set the islands of Zeeland and the North Sea as our target. 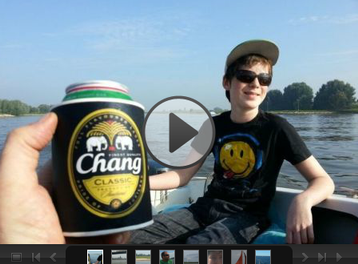 The previous trips were under sail but this time we dropped the mast and brought a massive 13 meter (North Dyno) kite with us as our main propulsion system. I got the kite boating idea after searching for alternative power systems for the Orion-3 and found out we weren't the only Dutch guys connecting a kite to a sailboat.

The previous weeks we had our trip to Thailand and I should have taken some Kite training then and there but it didn't come to that and so we set of motoring down the Waal river from the German border towards the North Sea.

The first day took us without major accidents or incidents to the city of Tiel. The second day brought us to Gorinchem were we did visit the town, had a luxury breakfast, bought our compass and books and took off for the Biesbosch. We arrived in Spieringsluis in the afternoon and took the Canadian canoe which we sunk within 10 minutes after departure and thirty seconds after I had put the phone / camera back into the watertight locker. After a couple of hours paddling around the Biesbosch, killing thousands of stingy flies, we had a BBQ and called it a day. 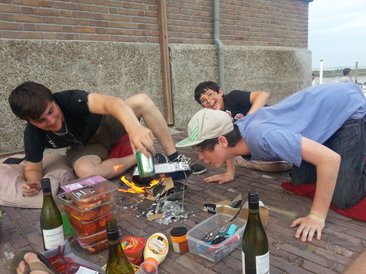 The next day we arrived in WillemStad a beautiful, small historical town with well preserved fortifications. We ate our French fries on top of the German bunkers and had a stroll around the town. The next day we stopped at Middelharnis on our way to Stellendam which wasn't all that interesting. At Stellendam we tried the kite for the first time and within 20 seconds, I managed to crash the thing into a tree ripping the kite in the process. We packed up our gear and had dinner at the Delta Works Museum Restaurant

After two days it was still pretty windy but we decided to give the North Sea a try. We had to plow through massive waves heading out to sea and filling the outboard engine was a near life threatening experience which we had to undertake every two hours. The only ship we encountered that day was a Dutch Fisher. In the afternoon the winds died down to a bearable strength and the waves shrunk back to normal. After a couple of hours we arrived at the third island. Although being more than tired and the salt was still stuck to our face, we went out for fabulous pizza. Back at the boat we crashed into a deep and well earned sleep. 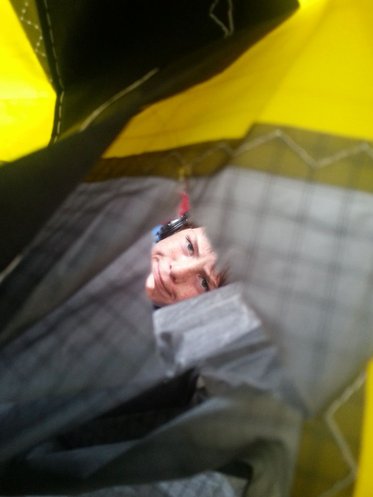 The next day we gave the kite another shot which turned out to be a major disaster. The previous attempt had ripped the kite which I managed to fix with the kitekit but this time I ripped the flesh of my finger trying to control the damned thing. Blood all over the deck and a monster kite that couldn't depower (as all the lines were tangled) made up my mind to cut the kite loose and only Stan's advice to just keep pulling one of the strings, saved me 800 euro's. We managed to haul the kite back in, patched up my hand and set off for Zierikzee. It was foolish to think I could just wing this kiting thing and I agree it was a stupid idea to try this without training.

A Seal popping up his head and the day being beautiful and a couple of beers later the kite disaster was forgotten and we arrived at Zierikzee which again is a beautiful historic little town where we stayed for two days. Trying to leave Zierikzee was a rough experience as the winds had stirred up stirdy waves, bashing our little ship all over the place. We had a beautiful motoring day over the Oosterschelde, the Veerse lake and the cannel through Walcheren where we saved and towed a yacht at Middelburg four times our size with engine problems. 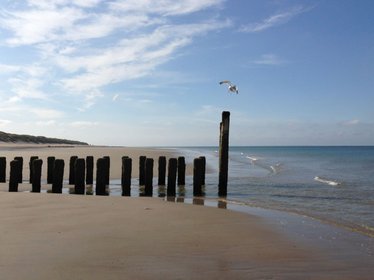 Middelburg was yet another beautiful old town with many harbors. We planned our night there but my little brother thought it would be a better idea for us to motor up to Vlissingen as he was going to visit us with his girlfriend Maxime and he had found the perfect camping spot near the water there. Of course I should of checked this, as Wouter is what we call in the Netherlands a 'nat nek' (wet neck). Arriving at Vlissing (already pretty tired) we found his preferred spot to be a massive industry harbor without any shelter or place to leave the boat. After another half an hour of motoring the Westerschelde we entered the North Sea Fishing port of Vlissingen where we were granted a emergency spot in the harbor as we should of reserved.

My brother managed to end up in Belgium on his way to us. Arriving late at night they had no place to go and we build them a Josef and Maria bed in the Cockpit. 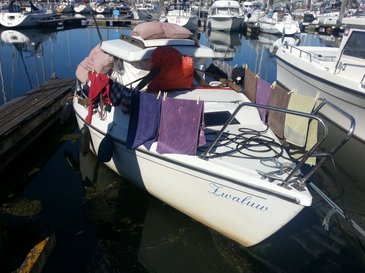 The next day the five of us motored up to Terneuzen. Within half an hour we were stopped by the Dutch Police Force with silly questions: Where are you going? Are you sure you're going there? Do you think it's wise to go there with a 4 Horsepower engine? etc. etc. Yes we know where we're going because we've got a map. Yes we're going there with the 4 Horsepower engine as we've got an extra 10 in the bonnet and yes I've got a full license and yes I've got a fire extinguisher and lifejackets for everyone aboard... OK, then where is your mast? (we've been asked this question at least a dozen times but it was quite funny in this situation) You're going to attach a kite to your boat? That’s funny because I do some kiting myself, he goes chatting away. They send us off with a warning as we were zigzagging the waterways. We weren't zigzagging at all. We were going in a straight line towards Terneuzen. It's the Westerschelde river that is zigzagging below us... 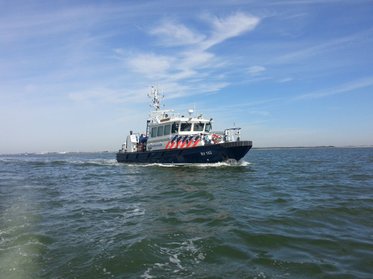 We had French fries in Terneuzen and one hour later we left for the small harbor of HoedekensKerke were it took us two hours to fire up the BBQ and less time to finish of a few too many wine bottles. After dinner a massive rain pour washed away all our sins and left us all wet behind the neck. Wouter and Maxime took another shot sleeping in their cockpit crib and the next day Maxime had to leave us for a funeral. The four of us continued the journey through the Cannel of South-Beveland up the Oosterschelde to end up at Stavenisse for the night. The next day we had to leave my brother behind as his girlfriend wanted him back home so us three true pirates left for Grevelingen lake were we were going to meet our internet date (Pirate Captain German Phil) at Den Osse harbor. The other objective was the Kite Training Center at Brouwersdam to help us tame our beastly kite. 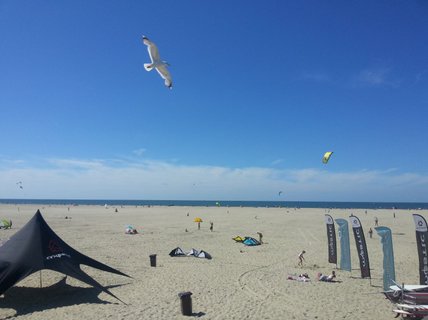 Phil had a mutinous crew member to take care of (his cousin which we never did get to see after this incident, so beware ye treasonous bastards...) and we left for Brouwersdam to take care of our business. Stan and Dieye spend the day at Seaworld having fun with the waterslides and I managed to finally get the kite up in the air at Natural-High Kite Surfing Center. Another boat was rescued from the rocks by us and ten minutes after that heroic deed we towed another lost boat with a mother and her kids having engine trouble. We stayed in Den Osse and Brouwersdam for all week and had a nice BBQ at Captain Phil's place who had to leave for England the day after. 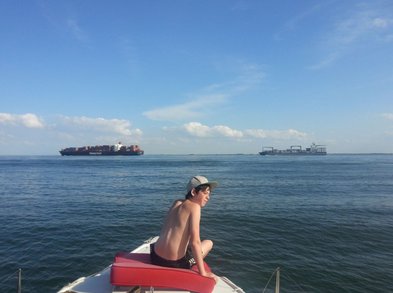 After three weeks in Zeeland we had to head home again and so we left Grevelingen lake into the Volkerak and up the Dintel river. Late at night we sneaked up into a harbor and left very early in the morning following the Dintel up into the river the Bergsche Maas. The next day we motored up two cannels and three rivers before we ended our tiring but very rewarding prep World Tour Journey. Next prepping trip will be in the Mediterranean Sea :) 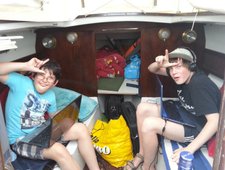 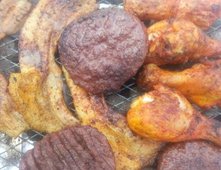 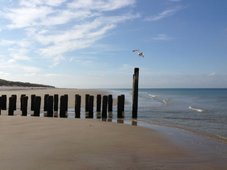 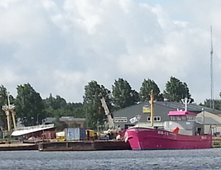